The Cerro Gordo or Yozosa volcano (also known as LLozosa) is formed by several volcanic eruptions and is part of a larger complex called Cerro Gordo- maar del Varondillo. It is located about 4 km. from Granátula, at an altitude of 831 m. above sea level and covers an area of about 280 ha. Its origin is related to the formation of the volcanic massif of Campo de Calatrava. Within this natural region, 332 emission centres have been detected in about 7200 km², 90 % of which are located in the Campo de Calatrava. The formation of the Cerro Gordo volcano as the volcanic massif of Campo de Calatrava has two phases: the first in the Upper Miocene (8.7 to 6.4 M.a.), accompanied by a phase of volcanic inactivity, and the second in the Pliocene and Lower Pleistocene (4.5 to 1.5 M.a.). According to the latest studies, the last eruption of some volcanoes, such as the Columba volcano, was delayed until 10000-5000 years ago. Therefore, according to international standards, these volcanoes should be considered active and not extinct.

The Cerro Gordo volcano had a violent birth. Its first eruption was of a hydromagmatic type, and gave rise to a large maar, a term that refers to "a lagoon occupying the crater of an ancient volcano", nowadays erased by subsequent eruptions. The second eruption caused an eruption with lava and ash clouds. Two flowing basalt flows extended south and west for several kilometres with a thickness of tens of metres, and a shower of black lapilli formed a small horseshoe edifice, the remains of which stand out in the strata inside the volcano. After a period of rest, a series of hydromagmatic eruptions occurred and red pyroclastic cones formed, which form most of the present-day volcano. This eruption ended with large mud and water flows that gave rise to the lahar that covers the volcano. The last stage caused a final effusive eruption, resulting in a small scoria cone that is preserved at the top of Cerro Gordo.

The inhabitants of Campo de Calatrava have lived for hundreds of thousands of years with this spectacular volcanic landscape, witnessing the last pulses of volcanic activity. This has had a great transcendence, directly or indirectly, for the inhabitants and towns that have passed through here, from just seeing the landscape with the whole range of brown, reddish, grey or black colours of its soils, due to the richness in many minerals related to volcanic eruptions; to the volcanic materials traditionally used in the construction of houses, for civil works, infrastructures, tools or jewellery objects (concrete, basalt, lapilli, obsidian, olivine, etc.); to forming part of the popular word and being part of the popular vocabulary of the area. ); to the point of forming part of the popular vocabulary and which can give their name to places such as Negrizales, Cerro de Las Cuevas, Cuevas Negras, La Sima or los Baños-Hervideros, the latter being of a medicinal nature.

At present, the mining of volcanoes coexists with the sustainable use of tourism, agriculture, livestock and hunting, but only a few volcanoes are protected for their ecological and socio-cultural interest.

In Granátula de Calatrava, the aim has been to make progress in its conservation and to enhance its value in order to museumise it and make it the first volcano on the Peninsula that can be visited. 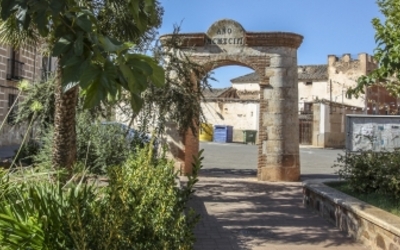