This huge volcano rises above the quartzite cliffs that form the northern flank of the Tirteafuera anticline. Its elevated position makes it visible from a large part of the volcanic territory, standing out as a "sharp hill" that breaks the monotonous level of the peaks of the Calatrava mountain ranges. Ancochea Soto considers it to be the oldest volcano in Campo de Calatrava, being 8 million years old, and although it is distinguished, according to the cuts made in the quarries at the front of the lava flows, an internal zone in which there is an intrusion of olivine leucitite with an age of around 6.4 million years.The eruption that forms the Morrón is essentially effusive with the emission of abundant lava that pours out in lava flows that descend the southern slopes of the mountains, filling a small valley and opening up into a wide lobe when they reach a plain where the flow is stopped due to a lack of input. The rocks are massive, and aligned with the large dome that forms the Morrón volcano, there is a small outcrop of melaleucite that marks the position of the eruptive fissure. This outcrop is 8.7 m.a. old and would represent the beginning of the eruptions in Campo de Calatrava.

The Morrón wastes are intensively exploited. In the 19th century and the first decades of the 20th century, cobblestones were obtained from them. The construction of the AVE (high-speed railway) led to a reactivation of the exploitation, and the use of the lava as ballast.

It was declared a Natural Monument by the Junta de Comunidades de Castilla La Mancha. 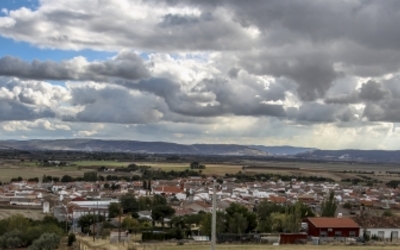