During this time of year, the towns of the province are especially alive with one of the deepest and most deeply-rooted celebrations in Spain: ‘Semana Santa’ or Easter Week, a commemoration with centuries of history and tradition, in which the passion and death of Jesus Christ is remembered.

Let yourself be won over in any town by the beauty of its processional parades, the quality and ornamentation of its carvings; by the austerity, fervour and participation of its brotherhoods. You will be pleasantly surprised by how these days of passion are lived. Days of meditation, but also celebration; a season of delicate vigil gastronomy, pan sweets, and sweet wine... In a province that from now on, you will always remember.

Domingo de Ramos (Palm Sunday) begins and for a whole week, the brotherhoods, the locals and the church celebrate this crucial moment in the Catholic religion surrounded by profane elements, some of which are very old.

We would like to highlight those declared of National Tourist Interest such as la Semana Santa in the city of Ciudad Real, or la Ruta de la Pasión de Calatrava, which passes through 10 towns in the region, as well as Easter Week in Daimiel, Campo de Criptana and Villarrubia de los Ojos, declared of Regional Tourist Interest too. These are unmissable destinations to enjoy in the province at this time of year. 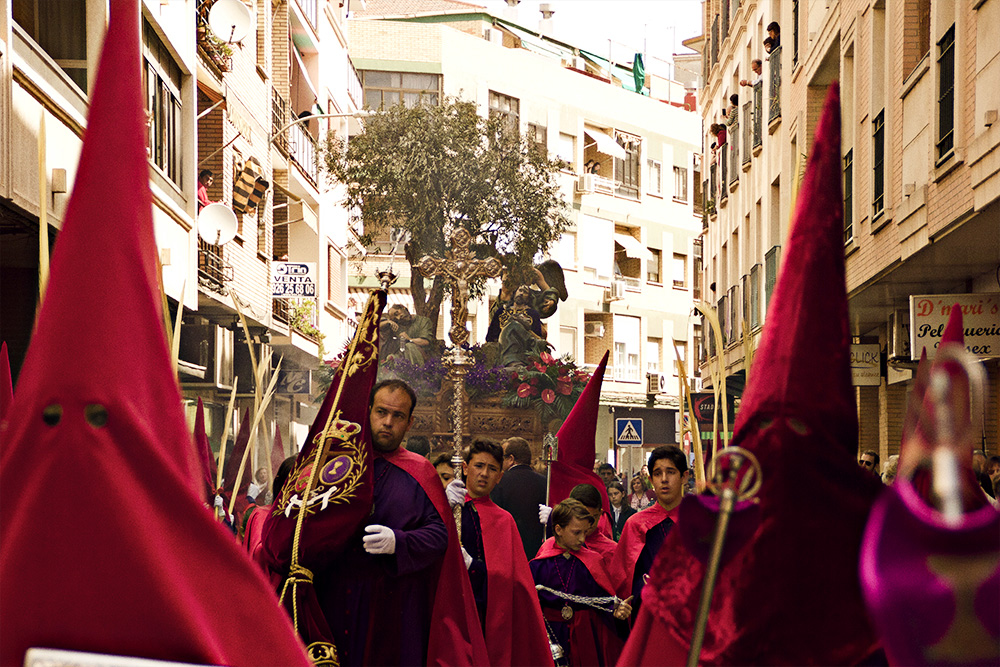 ‘Viernes Santo’ in Ciudad Real. "Come and discover the sound of the drums, the creaking of the chains, the works and carvings of important historical value, and share with the ‘costaleros’ and the brotherhoods their great fervour... Ciudad Real is waiting for you".

Semana Santa Semana Santa in Ciudad Real is one of the most important religious and cultural events celebrated in the city.

Every day, images representing the Passion of Christ are carried in processions, with a total of 24 brotherhoods with 32 floats, carried almost entirely by ‘costaleros’, which bring together more than 15,000 members of the brotherhoods.

Semana Santa in Ciudad Real has been declared of National Tourist Interest since 14 February, 2006. This religious celebration has been going on for 12 years now, filling every corner of the city with the smell of incense, passion and popular fervour, offering tourists images that are unrepeatable on any other date of visit.

The imagery of Semana Santa in the capital of the province should be highlighted, but also works and carvings of great historical and artistic value procession through all its streets.

It is difficult to highlight any other moment of this great Semana de Pasión, so we invite you to enjoy each of the days and nights of Lent. These nights break their silence with the sounds of the drums, the creaking of the chains, the solemnity and the raised voice of the foreman directing the ‘costaleros’, the majesty of the floats and thrones decorated for this great occasion, and the murmur and the great public devotion to one of the most deeply rooted traditions. Also, you can visit the churches, see the ‘guardapasos’, and share with the costaleros and brotherhoods their great courage and fervour. 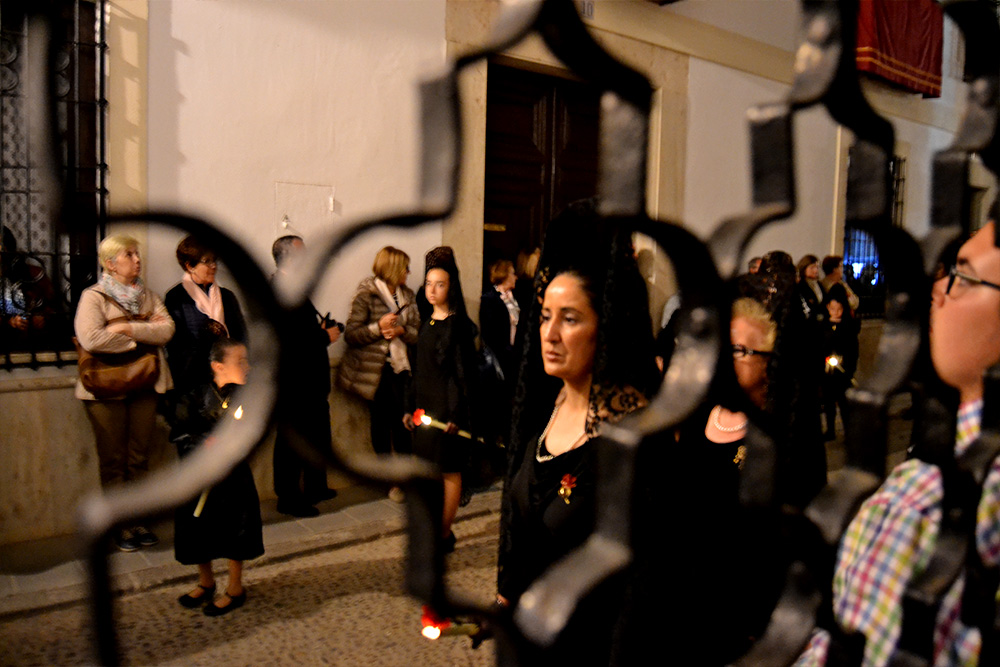 Another of our important events in the province is the "La Ruta de la Pasión Calatrava", which is undoubtedly and of an obligatory stop because it transcends the religious sphere and moves into the realm of the senses, to taste and enjoy this great spectacle in the Campo de Calatrava. A journey through the villages of Aldea del Rey, Almagro, Bolaños, Granátula, Miguelturra, Pozuelo, Torralba, Valenzuela, Moral and Calzada de Calatrava.

It was declared of National Tourist Interest on 8 March, 2007, being the first time that a "joint declaration" was granted to 10 Calatrava villages which contribute to the authenticity and relevance of this celebration. 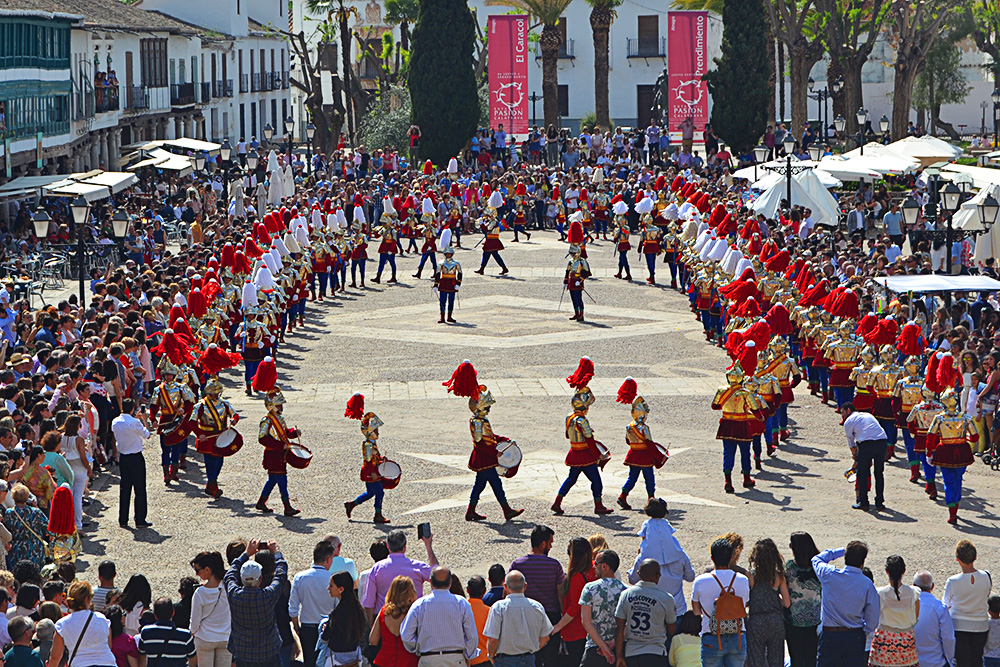 Los Armaos. Almagro, an emblematic lacemakers town and annual venue of the International Classical Theatre Festival. A very interesting curiosity of its Semana Santa is the procession of "Los Armaos", where religious brotherhoods with military discipline inherited from the imperial troops of the 16th-17th century, represent the Roman Empire.

The visitor is proposed to live a five-day itinerary visiting and enjoying the main activities that take place from Miércoles Santo (Holy Wednesday), to Domingo de Resurreción (Easter Sunday). The 20 music bands accompany the floats; light, colour, aromas and the fervour in the streets filled with more than 50 brotherhoods that participate in this explosion of popular sentiment. The religious and the profane merge to form one of the most unique celebrations in the region that year after year attracts thousands of visitors. More information here. 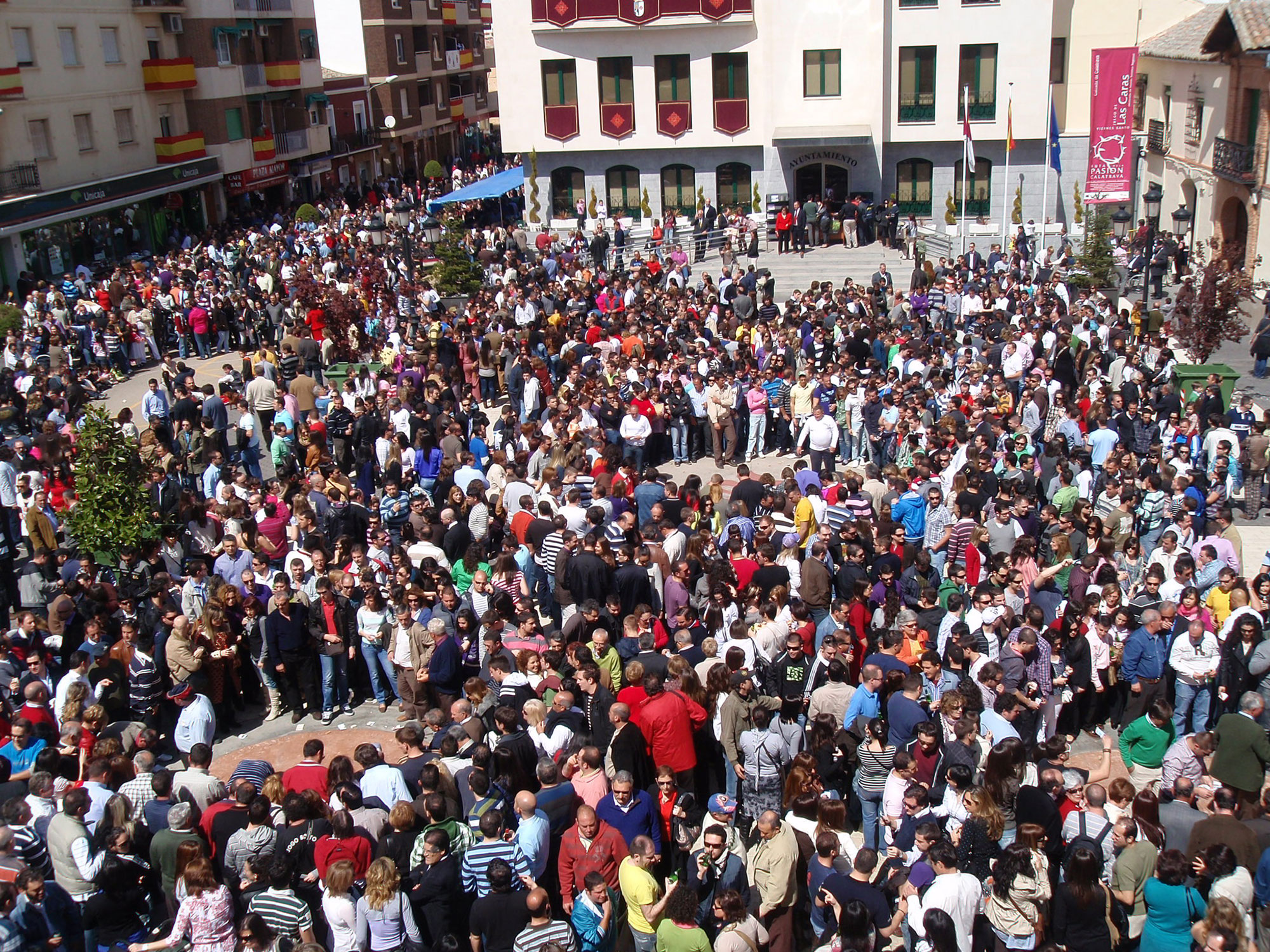 El "Juego de las Caras" (Game of the Faces) in Calzada de Calatrava: a secular event in the middle of Easter Week. Come to Pedro Almodóvar's hometown to discover and enjoy this game in which two copper coins from the 12th century are used from ten in the morning, until five in the afternoon on ‘Viernes Santo’.

We continue to go through our Easter Week in these lands of La Mancha, starting in three of its localities: Daimiel, Villarrubia de los Ojos and Campo de Criptana, all of them declared of Regional Tourist Interest.

Daimiel's origins date back to the 16th century, with evidence of the ordinances of the Vera Cruz brotherhood (1577), one of the firsts documented in La Mancha. During this same period, Daimiel was that villa in Campo de Calatrava with the largest number of brotherhoods, thirteen to be precise, as documented by the order's visitors.

Daimiel invites you to experience its Easter Week with tradition and history but, at the same time, you can visit the wetlands known as "Las Tablas de Daimiel", declared a National Park in 1973, as well as the archaeological site of "Motilla del Azuer" with more than 4,000 years of history.

The evolution of the brotherhoods during this period reached its peak during the Baroque period, when processional parades were held and, the passion, death and resurrection of Christ was staged through images, better known as "pasos".

More than twelve thousand brothers and sisters belonging to nine brotherhoods march through the streets of Daimiel. Two different styles with opposing influences converge in this Semana de Pasión daimieleña, the Andalusian in the profusion of candles and flowers that adorn the processional floats, and the sobriety and solemnity of a very deep Castilian influence.

A few kilometres away and following the smell of olive branches and incense, the senses open up to a world full of roots where sight, hearing, taste, smell, and touch can experience in this time of devotion, an explosion at reach, to be enjoyed. Holy Week in Villarrubia de los Ojos has seven processions, from ‘Viernes de Dolores’, to ‘Sábado Santo’. Three thousand and four hundred confraternities, wearing the habits and hoods of their respective brotherhoods, show great devotion in the processions to make the visitor experience the special emotion that these festivities have in the province of Ciudad Real.

We continue our journey through this extensive province and arrive at one of the more quixotic corners of the province: Campo de Criptana. This town brings together the recreation of the Passion, Death and Resurrection of Christ by an entire village. 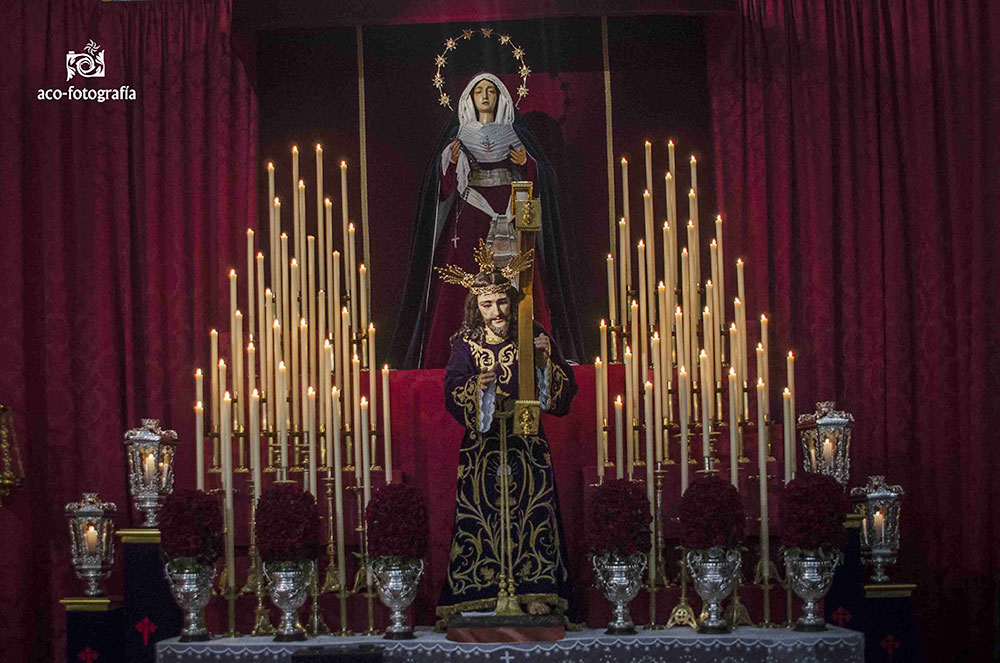 In Campo de Criptana its windmills, its typical streets and squares, its culture, gastronomy, wines, and landscapes of this Land of Giants… Awaits for you.

Its magnificent processions double the number of inhabitants of the miller village par excellence, known worldwide for being the place where specialists and researchers agree on the location of the most unequal and famous battle of the most universal novel: Don Quixote against the Giants.

This celebration stands out for its antiquity; the processions that take place in the streets and squares of the ‘Villa de los Molinos’ date back centuries in the transition from the Middle Ages, to the Modern ones.

‘La Procesión del Silencio’ and ‘Vía Crucis’ are obligatory stops in this peculiar town. They are known as the most important manifestations of the historical-artistic heritage of Criptana: la Sierra de los Molinos, among the most universal giants. More information here.

And what you really cannot miss is the great gastronomic event of Semana Santa in Ciudad Real, its many Lenten ‘tapas’ routes, the smell of the kitchens and cookers that prepare the classic ‘potaje de garbanzos’ (chickpea stew), ‘besugo en escabeche’ (pickled sea bream), tortilla de patatas (potato omelette) or ‘bacalao con tomate’ (cod with tomato). And also, of course, the quintessential Semana Santa’s sweet: torrijas. Depending on the town, there are ‘rosquillas’ (cinnamon and sugar sweets, somewhat stiffer than doughnuts), ‘canutos’ o ‘barquillos’ (wafers) and ‘flores’ (sugar flowers). And all of this, accompanied by the best wines of this great land. Please, do not forget that you are in front of one the largest – if not the largest one – vineyard in Europe, so do not hesitate on tasting these magnificent high-quality wines.

Come to enjoy and savour this great celebration of Semana Santa in each of the towns and cities of this kind, and rich province that has so much to offer to the tourists!